H.E. Sheikh Khalid bin Issam Al Qasimi, Chairman of the Department of Civil Aviation, Sharjah, inaugurated the exhibition in presence of H.E. Nicola Lener Italian Ambassador to the UAE, H.E. Giuseppe Finocchiaro, Italian Consul General in Dubai, Alberto Saco, Deputy Director in charge of Tourism and Trade in Torino, Manal Ataya, Director-General of SMA, Sheikh Salem Al Qassimi, Assistant Undersecretary for Arts and Heritage Sector, Ministry of Culture and Youth, Ida Zilio-Grandi, Director of the Italian Cultural Institute - Embassy of Italy to the UAE, Giovanni Curatola, Professor at the University of Udine and curator of the exhibition at the Sharjah Museum of  Islamic Civilization, and Dr Zaki Aslan, Director of ICCROM-Sharjah. 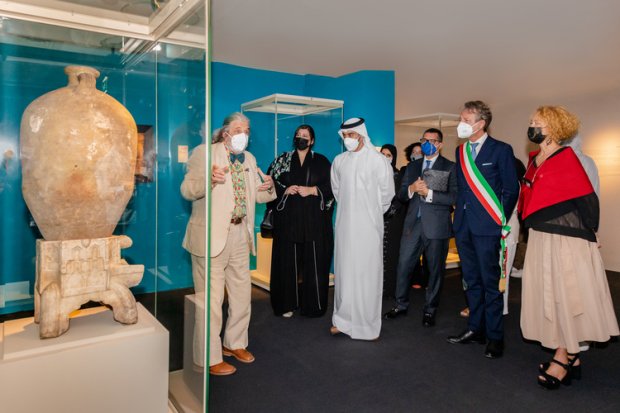 Organised in collaboration with the Italian Fondazione Torino Musei, the exhibition features 120 artifacts that are being exhibited for the first time outside of Italy and are related to water and people’s daily lives in the Islamic world, including decorated jugs, cups, carpets, fountains and other exquisite items sourced from different parts of the Islamic world.

Running until December 11, the exhibition was initiated with a manuscript containing the holy Quranic verse: "And we created every living thing from water”.

Collections on display are on loan from various renowned Italian public and private collections, and from the permanent collection of Sharjah Museum of Islamic Civilization and from Sharjah art Museum.

Revolving around four themes: The Blessings of Water and Islam, Water and Daily Life, Traditional Hammam and the Gardens, displayed items at the exhibition collectively illustrate the historical development of the numerous roles played by water in daily life, and represent the artistic embodiment of it in the Arabic and Islamic arts and culture.

The six-month exhibition will highlight the strong presence of water in Islam and Islamic heritage and civilization with water being mentioned several times in the Holy Quran, in verses that imposed rules on mankind’s behaviour towards this element, by that making Islam the only religion that set rules to protect water.

It will take visitors on an intellectual journey into previous civilizations, with a focus on Islamic civilization, through illustrating, from a pure artistic perspective, the deep-rooted cultural similarities and differences in the relationship binding water and evolution and how has water contributed to the creation of diverse civilisations and rich legacies of literature, philosophy, and music among other spheres.

Displayed items also illustrate water’s role in Islam within its religious context and show how water was used in the traditional Islamic baths known as Hammam, and highlight their health and social connotations while also shedding light on the use of water in agricultural engineering and irrigating gardens through techniques such as water canals and fountains.

Nicola Lener, Italian Ambassador to the UAE, said: “I am truly honoured to welcome this first Italian-Emirati exhibition which will pave the way for more cooperation between two highly acclaimed and prestigious cultural institutions namely Fondazione Torino Musei and the Sharjah Museum Authority, thus sending a message of hope and inspiration to our countries.”

He added: “Our precious relationship with Sharjah Museums Authority gets stronger through this exhibition which focuses on water as the most important element for life and human survival and as a precious asset that must be protected. Water is the foundation of every civilization based on the dynamics and methods of water transport and distribution."

Manal Ataya, Director General of SMA, said: “We are delighted to organise this exhibition, which is our first cooperation with Fondazione Torino Musei, to highlight the historical ties and common cultural heritage binding Italy and the material culture of the Islamic world.”

“It is important for us at SMA to partner with international institutions to display unique collections to our audiences which have never been seen before in the UAE or in the region, that contributed to shaping our shared human history throughout the ages,” added Ataya.

She underlined SMA’s commitment to achieve intercultural dialogue in line with the directives and support of His Highness Sheikh Dr. Sultan bin Mohammed Al Qasimi, Supreme Council Member and Ruler of Sharjah, to maintain cultural exchanges, and advance thought, social cohesion and inspiration by making sources of knowledge and learning accessible to everyone.”

“Contemplation leads to the realisation that, as water is a source of life, example of God’s mercy and his most precious gift, is in other forms like rainfalls and floods, the cause of ancient civilizations’ destruction.”

Among collections exhibited at the exhibition’s four sections a basin made from copper and decorated with gold and silver that was used by King Sultan al-Malik al-Nāṣir al-Dīn Muḥammad ibn Qalāwūn in the first half of the14th century.

Also a 19th century jug and a huge basin made from Ottoman tombac inlaid by gold-plated copper in the 19th century, a 16th century ottoman plate made from ceramics with the image of a multicoloured jug, a bronze jug with bronze formations, animal-shaped gold ornaments designed in India in the 16th century.

Other objects include a bronze ewer from the 10th century in India, of globular shape that rests on a circular slightly splayed foot, incised with meanderings, the body chased with bands reminiscent of turban’s folds.

Visitors can also enjoy a19th century Kashkul (Begging bowl), an oil paint canvas titled a Nubian Boy by Arthur von Ferraris in 1936, and an engraved porcelain portable water jar made from cooper in the 19th century.

The exhibition also features a Kilga (jar stand) from 12th century Egypt, Tugrakes (Golden Horn) Tondino dish from the 16th century Turkey, Lajvardina, pottery ewer from the 13th century Iran, a candlestick reused as a bucket in Northern Iraq in the 13th century and a 10th century bowl with fish designs from Central Asia.

Additionally, exhibits include a container of cosmetic kohl {black powder used as eye makeup} from the 11th century Egypt, a basin thought to be from the 18th century Iran, and a painting - oil on canvas - titled Alhambra, Granada (The Court of the Lions), by Alberto Pasini (1879).

Other pieces include Bidri silver-inlaid huqqa base from the 19th century India, and a water basin from Ghazni, Afghanistan from the 12th century.

On the sidelines of the exhibition, SMA is organizing a seminar carrying the same title with an aim to dive into the multidisciplinary roles and aspects of water.

The seminar will be held at Sharjah Museum of Islamic Civilization on June 12 at 10:30 am.

Moderated by Ida Zilio-Grandi, Director of the Italian Cultural Institute in Abu Dhabi, the seminar features Giovanni Curatola, Professor at the University of Udine and curator of the exhibition; Alberto Tiraferri, Professor at the Politecnico of Torino in the Department of Environment, Land and Infrastructure Engineering DIATI, in the field of Applied Environmental Engineering; and Dr.Tarek Merabtene, Professor at University of Sharjah.  Ph.D., Civil Engineering (Water Resources and Hydraulics Engineering). The seminar will broadcast live on Sharjah Museums Authority’s YouTube channel.