Sharjah:Over 350 doctors will be available for consultations at over 70 fixed and mobile clinics, while 150 riders will join them in spreading awareness about breast cancer for the 10th edition of the Pink Caravan Ride, UAE’s leading breast cancer awareness initiative by Sharjah-based civil society organisation Friends of Cancer Patients (FOCP).

This was announced by the Higher Steering Committee of the Pink Caravan Ride at a press conference to share details about the tenth ride which is scheduled to be held from February 26 to March 6, under the slogan “Plenty is Not Enough”. The conference, held today (Wednesday) at The Flag Island in Sharjah, was attended by important PCR supporters and partners, members of the media as well as the tenth edition’s medical team and equine volunteers.

The Steering Committee unveiled details of the ride, including an overview of the awareness and advocacy methods that would be undertaken by the upcoming edition of the ride. Specific details about the medical clinics for both women and men and free check-up days allocated to each emirate were also shared.
The organisers also unveiled details of the routes and the dates and number of the fixed and mobile clinics allotted to each emirate. The equine ride will commence in Sharjah on February 26 and 27 where it will stop at 10 locations, before moving to Dubai where it reach four locations over two days. This will be followed by Fujairah and Khorfakkan, Ras Al Khaimah, Umm Al Quwain, Ajman before concluding in Abu Dhabi. The organisers also detailed the future plans of the initiative and what they were looking forward to accomplishing in the coming years.

Addressing the media, BinKaram said: “Since the beginning of this ride, we have witnessed an annual growth in the number of participating volunteers and medical professionals, and in the responsiveness of official and community bodies, which has grown the Pink Caravan Ride into what it is today. We have been able to foster a sense of togetherness that is the crux of the UAE’s culture, and enabled the creation of an environment where cancer-related issues are a part of public policy, openly and comfortably discussed, and a part of the national agenda. The ride provides the latest equipment and screening methods which has contributed to the detection of 75 cases so far. Over the years, PCR has provided 64,012 free examinations costing over AED 30 million, and 670 of our volunteer riders have traveled over 1,800 km so far."

She added, "The slogan for the tenth ride is “Plenty Is Not Enough”. It confirms that the movement created by PCR is continuous and grows and increases every day in terms of societal as well as media support, in order to protect more lives and families, and to preserve the vitality and energies of our society. It serves to remind us that as long as there is even one individual in the community who needs care and attention, then plenty is not enough."

Discussing the 10th Pink Caravan Ride, Badr Al Juaidi expressed his gratitude, saying: “The growing awareness among the Emirati society regarding early examinations is one of the most important goals that have been achieved, in addition to other important gains that reflect on the spirit and culture of our society. It has also led to encouraging our young men and women to take up volunteering through various noble humanitarian enterprises.”

Speaking about the tenth edition, Dr Sawsan Al Madhi said: “Within a few years, the Pink Caravan Ride has turned into a huge volunteer campaign resonating around the world, as it is in line with the global need to combat breast cancer. It is also an expression of the culture of cooperation and partnership which prevails in the Emirati society, driving individuals as well as institutions.”

HE Dr Khalid Omar Al Midfa, Chairman of Sharjah Media City (Shams) said: “We are honoured to participate in various humanitarian initiatives, which highlight the contributions made in better establishing human health and safety, in Sharjah and across the region. We are pleased to support the “Pink Caravan,” which over the years has positively helped raise awareness about breast cancer and emphasizes the importance of undergoing screening by visiting their fully equipped mobile clinics, accessible to all who wish to benefit from the initiative.”

He added: "As part of our corporate social responsibility, we look forward to collaborate on similar initiatives that encourage the early detection of breast cancer and other non-communicable diseases, that can be eliminated by spreading awareness.”

Jassim Al Balooshi expressed his gratitude to the organisers of the Pink Caravan campaign and noted that the ride had progressed beyond looking for sponsorships. He pointed out that social participation was the need of the hour, and the entire society should come together and work to combat breast cancer, in line with the vision and directives of His Highness Sheikh Dr. Sultan bin Muhammad Al Qasimi, Supreme Council Member and Ruler of Sharjah.

On his part, Rashid Al-Obed said the Sharjah Broadcasting Authority reaffirmed faith in the Pink Caravan’s message and confirmed its commitment to supporting all the initiatives and efforts of the Friends of Cancer Patients.

Later, presentations announcing the details of equestrian and medical routes of the tenth ride were made by Sawsan Al Madhi and Badr Al Juaidi.

Fixed clinics
The Pink Caravan will organise a series of fixed clinics across the seven emirates that will begin functioning prior to the commencement of the ride and will continue for the duration of the ride.

Day 2 – Sharjah
PCR will hold clinics available for women on February 27 in Sharjah, from 2:00 pm – 10:00 pm at Mega Mall and Sahara Mall and from 2:00 pm to 10:00 pm at the Sharjah Islamic Bank Head Office. Men will be able to get themselves checked at clinics that be held at Sharjah Police Head Office as well as Jubail Market, from 10:00 am to 6:00 pm.

Day10 - Abu Dhabi
Pink Caravan will conclude its 10th ride at Abu Dhabi with three clinics for women females at Marina Mall, Dalma Mall and Khalidia Mall, all from 2:00 pm to 10:00 pm. Another clinic is also held at Al Hudaryiat Island from 10:00 am to 6:00pm.

PCR’s equestrian route
Outlining the PCR equestrian team’s awareness campaign, Badr Al Juaidi said the riding team would be flagged off from Sharjah Equestrian & Racing Club on Day 1, Wednesday, at 10:00 am. There will be five stops where the team will conduct awareness activities. The team will first halt at a water stop opposite SERC followed by a stop at the Sharjah Broadcasting Authority. They will have pit stops at Mughaider Children Center, Muwaileh Commercial and end the day’s ride at the Sharjah World Book Capital 2019 Monument at 7:00 pm, having covered a distance of 11.2 km.

The team will resume the awareness ride on Day 2, Thursday, from the Sharjah Chamber of Commerce and Industry at 8:00 am. It will first stop at the Sharjah Islamic Bank, followed by Abdullah Ibn Abbas Mosque, Mega Mall Sharjah, Sharjah Police Headquarter and the Supreme Council for Family Affairs, before reaching Al Majaz Waterfront at 5:20 pm, having covered 21 km.

The team will move to Dubai on Day 3, Friday, starting the awareness ride at 4:00 pm at the Gate Avenue at DIFC. The only stop on this day would be at the Dubai Boulevard, a distance of 5km, at 6:00 pm.

Day 4, Saturday, will again be spent in Dubai, with the team starting their awareness ride at 8:00 am at Al Mamzar Beach, followed by three stops - Al Mamzar Park, Etihad Museum, Salt-Kite Beach, before ending the day at Sufouh Beach at 5 pm, covering 21 km.

PCR’s equestrian team will cover a distance of 24 km in and around Fujairah and Khorfakkan on Day 5, Sunday. It will flag off at 8:00 am at the City Centre Fujairah, with stops at Flag Island, Century Mall, Fujairah Corniche, and Khorfakkan Old Market, winding up at Khorfakkan Hospital at 6:15 pm.

Moving to Ras Al Khaimah on Day 6, Monday, the Pink Caravan’s riders will start of at 9:00 am at HCT-RAK Women’s College and conduct awareness programmes at Saqr Hospital and Manar Mall. By 5:00 pm, the team will wind up the day at Al Qawasim Corniche, having ridden over 21 km.

Pink Caravan’s equestrian team will ride into Umm Al Quwain on Day 7, Tuesday. Starting from Sheikh Khalifa General Hospital at 9:00 am, the posse will first stop at the Industrial Area and then at Umm Al Quwain Hospital, ending the day’s programme at Kite Beach at 4:40 pm, having completed 21 km.

Ajman is the destination for Wednesday, Day 8 of the Pink Caravan Ride. The riders will begin the day’s activities 9:00 am at Ajman Corniche, followed by stops at the Municipality and Planning Department and City Life Al Khor Mall. After a 17-km ride, the team will end the day at Sheikh Medical City, Ajman, at 4:30 pm.

The riding team will move south-west to Abu Dhabi on Day 9, Thursday. Starting from the Ministry of Foreign Affairs at 8:30 am, the riders will cover 14 km across the emirate, stopping at Abu Dhabi Corniche, Marina Mall and Sheikh Zayed Grand Mosque Center, before concluding the day’s activities at Health Point at 4:50 pm.

Following the tradition, of the Pink Caravan Ride will conclude in Abu Dhabi on Day10, Friday. The riders will cover a distance of 5 km before ending the ride at Hudayriat Island.

Since its inception in 2011, the Pink Caravan has been actively engaged in highlighting the importance of early detection of breast cancer, and the repercussions of the disease the UAE society and economy have been facing. The Sharjah-based non-profit has played a key role in dispelling misconceptions related to breast cancer and offered support to patients and their families in need. The work FOCP and PCR have done in the past years have had a significant effect in reducing the spread of breast cancer and diminishing its progression to advanced stages through free medical examinations that have helped save lives of citizens and expatriates alike. Over the past nine years, the PCR campaign has offered free early-detection screenings to 64,000 people of different nationalities and ages, including a number of over 10,000 men. 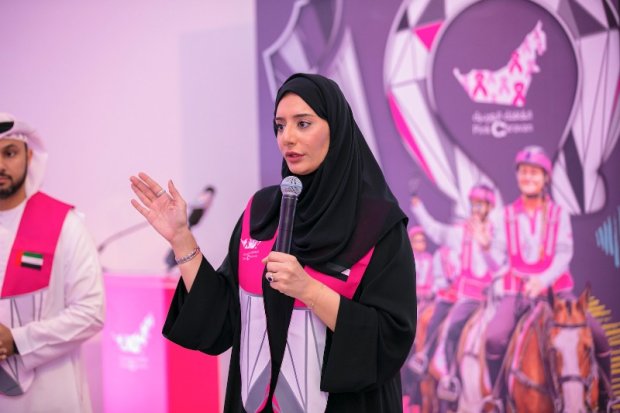